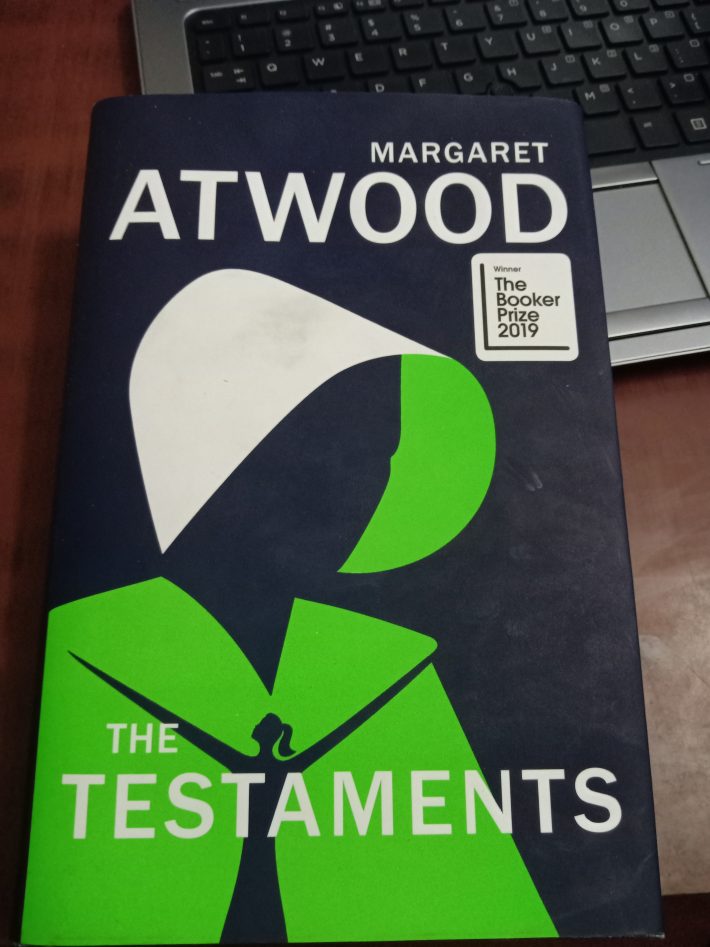 The Testaments is a book by Margaret Atwood. It came out in 2019 and won the Booker Prize 2019. It is also the sequel to the very famous and critically acclaimed book The Handmaid’s Tale which was published in 1985. Over the years, The Handmaid’s Tale has been the central point of many discussions. It was also recently adapted into a TV series of the same name. At the time of writing of this piece, 3 seasons have already been aired of the said series.

The sequel had long been a desire of thousands and thousands of people wanting to know what happened to their bold handmaid – Offred and her two daughters. But before we get into that, here are some major attractions about the book –

I can go on and on with the reasons as to why you should read this book. But I strongly suggest you read The Handmaid’s Tale first. It will help you make sense of a lot of characters, the state they are living in, and Gilead in general. You will need that back story to appreciate this one!

What is the book about?

The book – The Testaments continues from a few years after where The Handmaid’s Tale ended. The book is about the totalitarian Government of Gilead – a regime based on true Christianity. The regime believes that only men should be allowed to read and write. While women should only be concerned with their home and children. The women of Gilead are not allowed to read unless they are Aunts. The regime is divided into different sections.

The Working of Gilead

There are the Commanders – who hold the actual power in the country. Their wives who wear green to symbolize their status get to enjoy the higher status of their husbands but that’s all. Their work is to be a proper homemaker. The appropriate work for them includes weaving and gardening. Then there are Marthas. They are not allowed to have kids and wear gray. They help with cooking and household chores.

There are Handmaids. They wear red and are assigned to higher officials when their wives are unable to produce kids. They are easily the worst treated section in Gilead. Some look at them as sluts, some as sinners, and some just don’t see them. It’s so bad that they cannot even have their own names. Their names are assigned to them depending upon the Commander they are serving at the time. If a handmaid is assigned to say, Commander Judd – her name would become OfJudd.  Their plight and life are what you will get to read about in The Handmaid’s Tale.

Then there are Angels, guardians, and eyes. They wear black and represent the men who are responsible for the security and keeping the peace in Gilead. The other sections are Econopeople. They are like the middle-class of Gilead. They wear striped clothes and they don’t get Marthas or handmaids as the Commander does.

Where does The Testaments pick up from?

The book doesn’t focus on Offred as its predecessor did. It focuses instead on her two daughters and Aunt Lydia. Aunt Lydia came out as this huge villain in The Handmaid’s Tale but the sequel shines this whole new light on her character.

She is one of the most prominent figures in Gilead. Possibly the most powerful women in Gilead. She disciplines the women sphere in Gilead. She had a life before Gilead and the book truly shows how her character has grown and somehow made a space in this different world.

That’s who Aunt Lydia is. First generation. Harsh and brave. Calculative and manipulative. Someone who did things that would be considered blasphemous but it had to be done so that there could be peace.

The book beautifully tests your patience. I hated her when I was first introduced to her character in The Handmaid’s Tale. But The Testaments has completely managed to change my opinion of her. Some pages of the book – you will be cursing her, some you will be crying for her, and some you will be blessing her.

She was a baby when she was snatched away from her mother. Her mother was forced to become a Handmaid while Agnes herself was picked up by a Commander’s family. So, even though she was born before Gilead officially came into existence, she can be considered as a part of the second generation. She is what you can call a proper Gilead girl. She has a high status and a loving mother.

But is that enough? As women, we are taught to call out when something is wrong. But these girls, they have been taught from a young age that it’s their fault. But how do you cope up with sexual harassment in such an environment? A place which teaches you that it is your fault, that it is your duty to not tempt men, that you are impure if a man other than your husband touches you. You become scared. So much so that it is easier to cut your wrists than to marry. It is easier to not say anything than to call out a disgusting doctor knowing he would be trusted because he is good at his job and he is a man.

Even after all this, the real chaos begins when your faith itself is questioned. When everything you have believed in comes crashing down. It’s a black hole and you don’t know how to put yourself back up. And this is exactly what poor Agnes has to face.

Your identity is everything. Your name, your parents, your family. They make you you. But what if all of it is a lie. Nicole has been living a lie. Living with people who are not exactly her parents, never really fitting in. But she doesn’t know it.

She lives in Canada – after her mother Offred was able to smuggle her out but she doesn’t know that. She didn’t even know her real name until her 16th birthday. Growing up she never felt connected with her parents. Once she learns of her real identity, things take a turn for worse.

I can’t talk much about her without giving away the story. You should, however, know that life is equally hard for a 16-year old especially when nations are fighting over you.

The three characters come together in the most unexpected way and while the ending is bittersweet, that isn’t the actual gem. The gem is every page of the book. From the first page, you realize just how important little things are – things that we take for granted. Things like clothes or even a clean bathroom.

There is not much that you won’t like about the book. You can feel though in certain pages that it is rushed. There are sections where you would want the book to be more detailed. You want to know more about Gilead and how this batch of girls who have only known Gilead as home come to terms with questioning their faith.

You might also feel that it is not as good as The Handmaid’s Tale. That book was something else. It started something inside so many people – forcing them to question the relevance of it all. The Testaments might not have the same powerful impact. But it does make you think.

It is a powerful book and very appropriate for the current scape. Read this book now. NOW!